Nature's Artwork on the Alaskan Landscape

(excerpts from the Foreword by Ken Baehr) 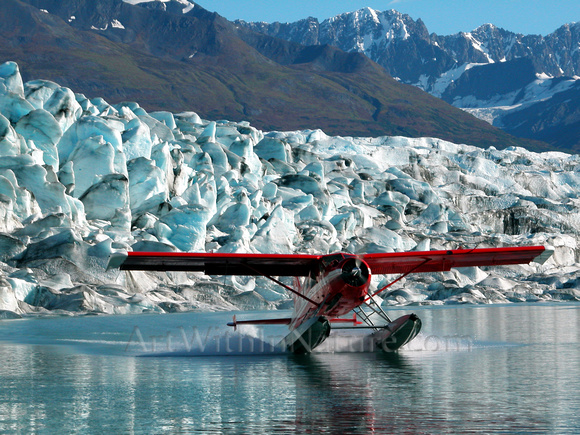 “Long before I knew Mark as a real person, I admired his work as a photographer of stunning landscapes.  There was something about them that spoke to me on both a technical and spiritual level. ..  As I became more and more familiar with Mark's work, I began to understand his perspective.  He is a pilot.  His aircraft takes him to vantage points above the hubbub of daily existence.  While airborne he has the time, space, and separation from the mundane of the human existence.  To say that he has the capability to grab the big picture is not a pun. Only an astronaut can experience a broader view.  When he lands on a glacier, or a river bed; when he flies over a mountain range; when he looks down on a flight of migrating birds; when he peers into an ice cave far removed from other humans, he cannot help but be moved deep inside his soul.  To me, that is the beauty and uniqueness of Mark's photography.  His work is technically superior to most that I have seen in my 40 plus years as a photographer.  His piloting skills take him to places most photographers just cannot go.  More importantly, however, his perspective allows him to push that little black button on his camera that is aimed in just the right direction at just the right moment. As a result his images contain in them the beauty of the landscapes that surround him but also that spiritual connection with the planet itself.  His work speaks to me on many levels. I admire his technical expertise. I admire the locations in which he chooses to shoot. I admire his way of seeing. Most of all, his images help me to be aware of who I am and and where I fit into the grand scale of the universe. That is a lot to accomplish in a series of photographs, but he has done it. Enjoy.”

Your signed copy can arrive in about four days in the U.S.A. via Priority Mail for only $49.95 plus $12 for USPS shipping.

© Art Within Nature Permission must be granted in writing before any type of use what so ever.
Powered by ZENFOLIO User Agreement
Cancel
Continue