Alaska Is Over the Rainbow

ALASKA IS OVER THE RAINBOW

Yes Dorothy, here in Alaska you can fly 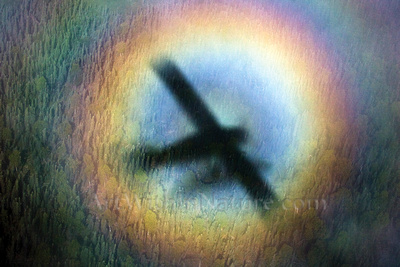 Flying Through the Rainbow

over the rainbow, but it helps to have a good pilot if you want to see Kansas again.

I came to Alaska and began my bush pilot career in 1991. A challenging trip from Fairbanks to Barrow was one of my first charters and it and proved to be a memorable one. I had been hired by the owner of a four seat, Cessna 172, to fly to Barrow so a politician living there could campaign to the nearby villages accessible only by airplane. After a thorough pre-flight of the plane I was to pilot, I left Fairbanks that morning and flew into a spring snowstorm which had developed around the town. I started my journey by following city street lights leading to the Elliot Highway, the Trans Alaska Pipeline and on into the mountain passes. Sitting in an icy cockpit, with gloved fingers, I pulled on the carburetor heat lever. This makes it so that the water vapor in the fuel will not ice up in the carburetor venturi and starve my engine of gas. A small heater vent warmed by the exhaust pipe, barely kept a clear spot on the inside of my windscreen. In the days before GPS, pilot navigation required I had one eye on my map, one on my compass and one out the window. Eventually I exited the first snow storm to land 180 miles later in Bettles and have a well deserved hot lunch. 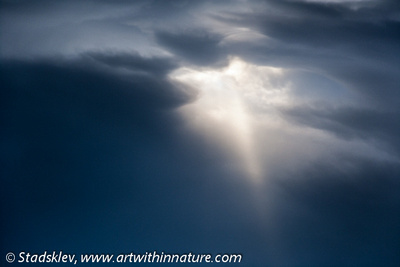 After a short rest and refueling the Cessna, I left Bettles for Anatuvik pass with the map on my knee and a compass heading. While Atigun pass to the east did have the advantage of the Dalton highway in case of emergencies, it would add 100 miles to my flight. Due to fuel and flight planning I needed to fly as direct as possible through the Brooks Range. About half an hour out of Bettles I began to fly into the Endicott Mountains and the Gates of the Arctic National Park. As I flew along the National Wild and Scenic John River, I noticed my magnetic compass was 60 degrees different from my engine driven gyro-compass. So, thinking I had forgotten to set it before take-off in Bettles, I twisted the reset knob and matched the vacuum gyro to my present magnetic compass heading. Then a few minutes later I noticed the same problem again, this time 120 degrees in the opposite direction from my last correction. Puzzled I thought I had somehow reversed my correction when I dialed it into the gyro, so again I twisted the reset knob. After watching the magnetic compass steadily for the next five minutes it then became apparent that the mountains around me contained so much metal ore my compass was swinging back and forth looking for North. Hence the footnote on my aviation map, “Compass headings may be unreliable in the vicinity of these mountains”. Now my magnetic and gyro-driven compasses were both unreliable. I was left navigating strictly by comparing landmarks, that I had never seen before, to those depicted on my aviation map. In the mountains that was a fairly straight forward task as long as I kept track which I did with little pencil marks. As I left the mountain pass for Barrow I made my best guess at a northwest heading.

I had never seen the north slope from the air 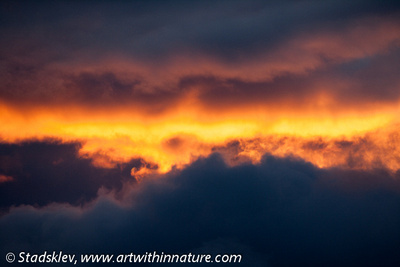 and was in for a shock. The terrain ahead appeared as flat as the Nebraska plains I had grown up in. All I saw were hundreds of ponds and tiny creeks but nothing easily recognizable as a landmark. The shape of some ponds only a few acres in size might match the shapes on the map, but aviation maps are made from aerial photos ten to twenty years old. It was like flying over a thousand piece jigsaw puzzle but with lots of pieces missing. To keep from getting lost I began tracking my way across the broad tundra making little pencil marks besides possible pond shapes. Soon the clouds began to return and then even the pond shapes were smothered under an increasing blanket of snow. The worsening weather ahead forced me to fly lower and lower to remain clear of the clouds and potential icing. This reduced my ability to pick out land features or to receive the distant navigational radio beacons. To add to my anxiety, due to the nearly 400 mile leg I was on, I only had enough fuel to reach Barrow plus the required 30 minutes reserve. If the winds aloft got stronger from the northwest even that little reserve would be lost. Still, I continued on believing that as I got closer I would be able to pick up one of the radio navigational aids in Barrow and home directly to the 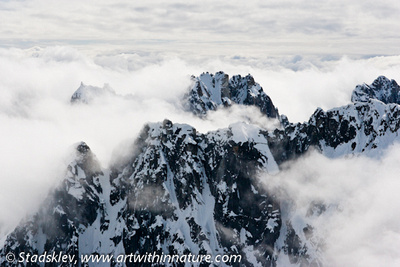 runway. Finally uncertain as to my actual heading, I decided I had to have instrument navigation or I would end up another Amelia Earhart, so up I climbed back into the clouds, gaining altitude that would allow me to receive Barrow's distant beacon. Because I had lost all outside visibility, I called flight control center in Anchorage for an instrument flight plan and clearance. Proceeding on towards Barrow I nervously watched my fuel gauges and computed and recomputed my time to the runway. What most people don't realize is pilots do not figure miles to the gallon, because strong head winds aloft can change that figure from 100 miles to 50 miles for 15 gallons. We compute in time aloft. The only thing I could do was set my throttle and mixture for best economy performance and stretch out my fuel endurance. After what seemed like an hour I was finally able to pick up the VOR beacon and correct my heading directly towards Barrow. I had been within fifteen degrees and patted myself on the back for having navigated so well.

Flying along in the clouds I then unexpectedly got a call from flight center to hold my present position. What a “hold” means is that I have to remain flying in circles over a given point until Anchorage center tells me it is safe to continue into the airport. The Barrow flight service agent who monitors local flight plans, had suddenly closed the airspace around their airport to all instrument flying traffic because of an overdue aircraft. 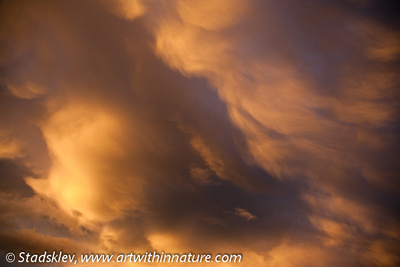 A twin engine Otter had filed a round trip flight plan north over the sea ice and hadn't been heard from. If the overdue aircraft came back without radios the fear was that no one would know they were inbound and this could set up a possible midair collision. As I began my race track patterns in the clouds I watched as small bits of ice compacted on my wings leading edges. Most small planes, mine included, do not have de-icing features. The Cessna would handle some small amounts of ice but how much? I was not a test pilot and I didn't want to challenge the placard plainly visible on the control panel, “Do not fly in icing conditions”. All it would take is a small layer of ice to change the shape of the wing and turn my aircraft into an uncontrolled falling leaf. That early in my career I had never experienced watching ice build on the wing of an airplane. I tried to think of what options I had left to me. Being flexible is an important part of flight planning but in the northwest corner of Alaska alternate airports for a limited range small plane are not an option, and with my dwindling fuel supply I had long since flown past my point of being able to return to Bettles.

I knew that if I continued to let others dictate my flight path that I would loose control of my situation, so I called Anchorage center radio back and told him I would have to descend out of the clouds to lose the ice. This meant I no longer would have a valid instrument flight plan as I would be below their radar's airspace. But once I was out of the clouds the ice stopped building. I felt I at least had a controllable airplane again. I spent another tense few minutes continuing my hold circles under the clouds and over the white landscape. Finally I called the Barrow flight service agent and told him I was beginning to get worried about my fuel, and asked how much longer he anticipated holding the airspace for the overdue aircraft. He replied, if I could get to the airport while remaining free of the clouds and maintaining visual separation from any aircraft, that I could come on in to his airport. Having heard that clearance it felt like, after listening to hours of deliberation on my fate, a judge suddenly smacked his gavel and pronounced “case dismissed”. At last I was in charge of my planes course again and I was able to relax, dial in my navigational beacon, and follow it the last few miles to the Barrow airport.

The next day I learned that the twin engine Otter actually had never been over due. The flight service agent had made a one hour mistake in his math and the Otter arrived safely in Barrow behind me. In the morning my charter showed up with a couple of her friends and off we went to continue the battle against the odds, the low weather, low fuel, long distances and frozen runways. I had made it through one Alaskan storm and would by luck and by cunning for the next 20 years continue to carry my cargo and passengers over the magnificent wilderness that is Alaska.

On this side of the rainbow, the opportunities for adventure are only limited by your imagination and your ability to plan ahead. Hiking, boating, flying or just driving thousands of scenic and remote miles will lead you to discover what makes Alaska the last frontier and why despite the challenges or maybe because of them, there is no place like Alaska. Alaska is the place we call home.

Mark Stadsklev is the author of “Alaskan Air: Nature's Artwork on the Alaskan Landscape”. A book of award winning photography available on Amazon.com or for a signed copy through his website, http://www.artwithinnature.com or by email to [email protected]

Bob Self(non-registered)
Great story, Mark. As a novice pilot several years ago (and still, by your standards), I experienced some tense moments on a solo cross country, but nothing like this. I am so glad to have met you on the flight to Denali on 8/3.
Scott Mikkelsen(non-registered)
Great stuff Mark!
No comments posted.
Loading...
Subscribe
RSS
Recent Posts
A Dragon Appears How to freeze your toes and have a great time doing it shooting the Aurora Summer 2016 Day long flight Safari half price sale Six minutes of fame on the BBC Think Before You Shoot Alaska Is Over the Rainbow Frosted: Alaska Hoar Frost Creates a Wonderland
Keywords
alaska photography stadsklev nature photo safari frost winter night weather Travel
Archive
January February March April May June July August September October November December
© Art Within Nature Permission must be granted in writing before any type of use what so ever.
Powered by ZENFOLIO User Agreement
Cancel
Continue